Well, hello everyone. This blog has been a long time coming and is a promise that I’ve been reluctant to keep with myself. You’ll understand in a little bit. Today’s date (the date I’m writing this) is the first of June and when you’re reading it I don’t know. It will be published on the fourth though. Which is important because that Friday it will be my Taylors twelve birthday. I am the original owner of this guitar. It was born on June 8th, 2006 and was the twelfth guitar made that day. Which makes this year a sort of golden birthday, because it was the twelfth guitar made that day and it’s twelve years old this year. The only way I know this is because there’s a website which decodes the serial number on the guitar.


We have flown in planes together, driven in cars, trucks, SUV’s, hybrids, and even paddle wheel river boats. I’ve played gigs from Nova Scotia to Texas with her. Iowa, Wisconsin, Minnesota, Canada, have all played host to us. I even played for a few years with it on a paddle wheel river boat going up the Mississippi through a lock’n’dam and back down again.


This blog begins this way because I did make a promise to myself. One that I’m reluctant to follow through with now. Here it is. I found a different guitar. I had been looking for a wider necked guitar so I could do finger-style better. I have been a big fan of that for some time now and the thinner neck of the Taylor made my fingers cluster together more. The new guitar was pretty expensive by normal standards, but for a guitar of it’s caliber it was a deal. I bought it, but the only way I could rationalize another guitar was if I sold one or two others. The Taylor is one of them the other will come in time.

What follows are some photos of the guitar, it’s case, and some of the small nicks which have happened in our journey together.


We will start with the case. It has one nick in it as you can see in the photo, but the rest is fine. It’s quite solid. The handle is strong and so are the latches. It has good strong latches I might add. 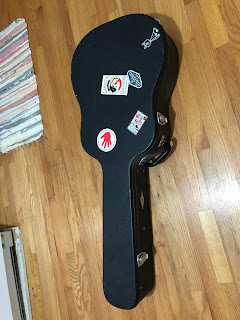 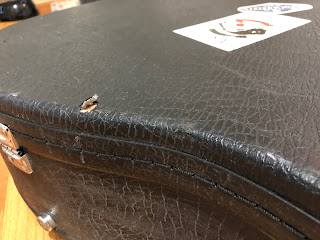 There are a couple of small nicks on the back which you will see here. You can also see the beauty of that wood which is just starting to come into its own at 12 years old. When you watch the video you’ll hear the thick full sounding beauty of this dreadnought. 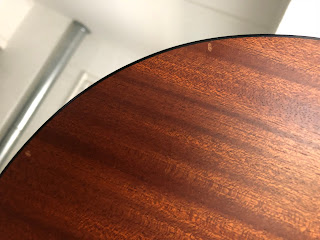 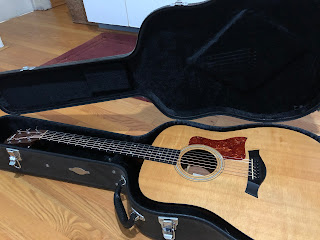 On the front near the top you’ll see one or two minor pick accidents. Again these things speak to the fullness of this guitars life experiences the shows, the road, the history. It has had more experiences in it’s twelve years then many other guitars which sit on a wall in a house their whole life. 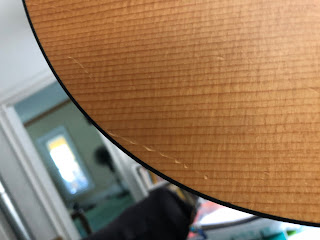 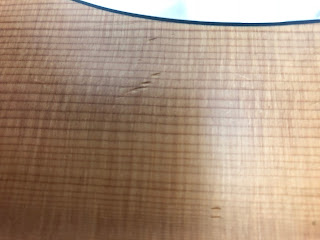 The guitar I ended up getting is a Martin 000EC. It’s an Eric Clapton signature model. It’s the signature model he played in the eighties for his ‘Unplugged’ MTV special. Now don’t go thinking it’s that same guitar because it’s not it’s just a signature Martin like that. Uffda, wouldn’t that be cool though?
So it’s time to say goodbye to my beloved Taylor. I hardly ever play her anymore and I think a guitar is way way more than a piece of furniture to stand on a wall. It needs to be played.


I hope whomever gets her plays her well. I won’t be sending it through the mail. This is for local pick up only.

Also here’s a link to places you can buy the albums I made with that guitar. Help a brother out.
https://itunes.apple.com/us/artist/trevor-marty/86791425

Here’s a link to a Spotify page of mine. Play some of my tunes y’all.
Link

I hope you have a wonderful day.

--Trevor Marty
Posted by trevormarty at 12:00 AM